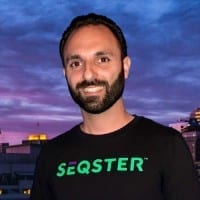 Ardy Arianpour is CEO & Co-Founder of Seqster, the first consumer driven healthcare technology platform that enables individuals to aggregate their EHR, genomics and fitness data in one place and share with their family creating a multi-generational health record. Ardy is a visionary genomics executive and serial entrepreneur in the biotech industry. Prior to starting Seqster, Ardy launched several clinical and consumer-based genetic tests as CCO of Pathway Genomics and SVP of Ambry Genetics, which sold to Konica for $1B in 2017. As a key player in the 2013 landmark SCOTUS decision scrapping gene patents, Ardy played an instrumental role in expanding genetic testing access with the launch of BRCA testing benefiting patients and family members across the country.

Ardy received his BS in Biological Sciences from UC Irvine and an MBA from Marshall Goldsmith School of Management.