Nick Giannas with Witt/Kieffer on Managing Your Health IT Career 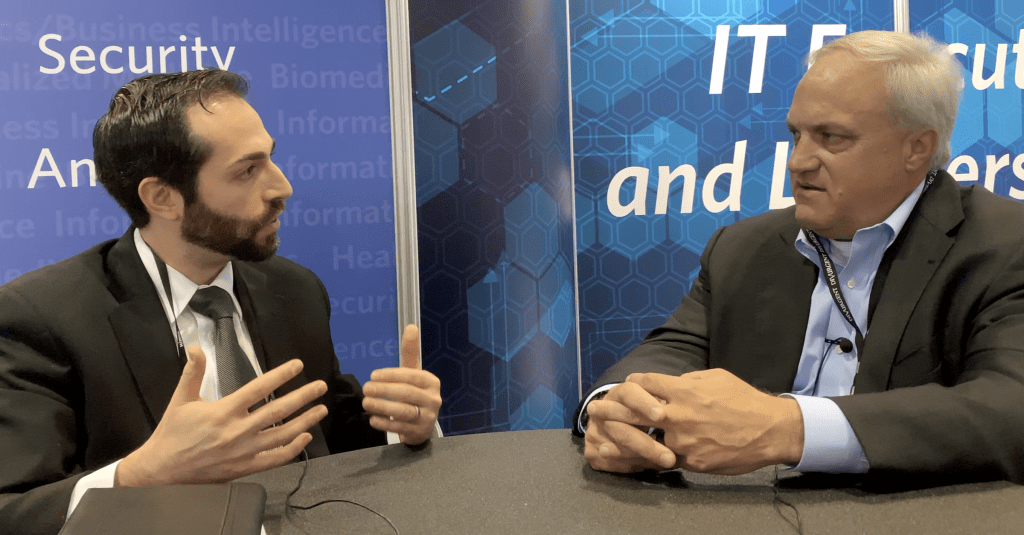 Executive search firms are busy in Health IT. New roles are emerging and the requirements for existing roles are changing. Check out this discussion from the floor of HIMSS with Nick Giannas from Witt/Kieffer on some of these changes.

Bill Russell:                   00:11                Welcome to this week in health it where we discussed the news information and emerging thought with leaders from across the health care industry. This is Bill Russell. Recovering healthcare CIO and creator of this week in health it, a set of podcasts and videos dedicated to training the next generation of health it leaders. This podcast is brought to you by health lyrics, helping you build agile, efficient and effective health. It. Let’s talk visit Health Lyrics. Com to schedule your free consultation. We were recording a series of discussions with industry influencers at the Chime Himss 2019 conference. Here’s another of these great conversations. Hope you enjoy.

Bill Russell:                   01:35                Well, one of the reasons I really wanted to have the conversation with you is because, you know, as, uh, as I’m talking to these CIO’s and whatnot, I’m hearing all these different roles start to pop up. And it’s, it’s fascinating because I think it’s indicative of the changes that are going on with health care. We’re starting to focus on consumer more. Obviously, data is huge and continues to be huge. Uh, and security has taken an elevated role. Is it, uh, what are people looking at? What are systems looking for? Let’s start with security. Okay. That’s gotta be a hard role to fill. I mean, those people are in high demand, right? That’s why they come to you, right? Because they can’t find something. Right. Um, but what are they looking for in a security officer for say, uh, let’s say a mid tier, like a $3 billion health system? It’s still a huge company and they need good security. What are they looking for in that candidate?

Nick Giannas:                02:22                Well, they certainly want the information security background, right? Understanding it from, from a technology perspective, but I think they’re more interested in a, from a business perspective, having that business acumen, right? And being able to communicate technology in business terms that executives can understand. Right, right.

Bill Russell:                   03:11                There’s, there’s no good way to say this, but at, you know, the health system I was at 26,000 employees and essentially that’s your weakest point, right? So unless you can educate people and bring them forward and say, look, reusing your password over and over again on the Internet, even if it’s not within the health system, you’re using it for your banking site and whatever, that’s a security risk. And they go, really? How can that be a security risk? It’s my bank. It’s like, well, if you use it three, four, five times, you know, that that becomes a different vectors, as I say, to pick up that information once they pick that up. Now that can get into the EHR data if you’re a physician

Nick Giannas:                04:40                Absolutely. So the other thing is, is where it’s reporting to, so to speak. It can be reporting up through compliance or have a dual reporting relationship or, or reports to the CIO. So it really depends on, uh, a number of factors like the culture of the organization and how they’ve structured it. But it also how mature that information security program is.

Bill Russell:                   05:27                So it’s a strategy position and uh, and an implementation position, I assume strategy because we were swimming in data, right? And so I would assume when you have that conversation around the analytics officers, they’re saying, we need somebody who can lead us, somebody that can help us to, uh, you know, collaborate with the physicians, collaborate with the research researchers and whatnot, but help us to guide us in terms of not only the, uh, the framework, the infrastructure and the framework to get things done, but also where’s it going? And sort of visionary.

Nick Giannas:                06:01                Absolutely. Moving to a more centralized model, moving to a single source of truth where you can get access to a actionable data where you could support business and political transformation. Right? So getting that data into the hands of clinicians to make informed decisions. Right. And being able to build the competence, uh, uh, and to be insightful, right. To the organization.

Nick Giannas:                07:06                Well, yeah, you got to look at it. What, what do you want to do? Yeah, I think, I think you have to be just as you are a strategic in your role, I’ve always said this, you should be strategic, uh, in your career from your correct. Right. Right. So if your end goal is to be a CIO is your next opportunity, what does your next opportunity look like? Cause you want to make sure that it’s on the right career path to get to your ultimate goal, right? So always, if you’re looking at a transition, do your homework, right? Really take off, take a step back and think out. I think about what you really want to do. What do you want to do next? And not only look at do your homework from a career perspective, but if you see an opportunity, yes. If it’s your dream job, obviously you want to act on it pretty quickly, but don’t rush into it and make sure you take your time, do your homework, understand the, the role that you’re looking at and the, and, uh, and the organization to make sure this is the right fit for you, both personally and professionally.

Bill Russell:                   08:01                One of the things I, I talked to people about when they’re say, well, you know, I think I want to be a CIO someday. I’m like, we’ll talk to some CIO’s. Make sure that’s what you want to be. And by the way, being a CIO of a $500 million company and a 3 billion and at 10 billion or $30 billion company, those are different things. I mean, I talked to, yesterday, I talked to the CIO, former CIO for southwest airlines and uh, and we were just talking about how different it is to, to run something. Maybe that’s 6 billion and something that’s sure. 30 billion. Uh, it’s a very, you know, we were sort of joking. It’s like, I, I don’t think I’ve touched a keyboard to do anything other than email for almost a decade. I mean, you get to that role and it’s a leadership role. It’s a, it’s a, uh, it’s a strategy, vision leadership, people development role and they don’t expect you to be in the data looking at for those size organizations. But if you’re at a $500 billion startup, they expect you to understand AWS and architecture and project management. Those kinds of things,

Nick Giannas:                09:05                you certainly have to roll up your sleeves and those positions compared to the, you know, uh, positions that are much larger health systems or much larger organizations where a lot of your work is at the strategic level.

Nick Giannas:                09:26                No, cause I think what happens, it’s the evolution of someones career, right? Uh, they enjoy being able to work at the operational level. Uh, but once you start to continue on and become more experienced in your career, uh, really leading that corporate strategy for it and aligning it with the strategic priorities is something that people aspire to, to be involved in being at the table. Right. I mean, that’s what CEO’s and have worked through for all these years. I mean, you know this, right? I mean it was not thought of that as a strategic, uh, strategic.

Nick Giannas:                10:14                Right? Well, and you’re still seeing organizations that are, you know, elevating their CIO position or the other traditional positions, like a CTO, going from a more of a, a director of technical services to a VP CTO or going from a CIO to a vice president or an executive vice president. So how does part of the senior leadership team,

Bill Russell:                   10:34                so somebody is in between roles now, we’ve seen this recently, the CIO role has been a little fluid lately, some health systems, uh, and we’re seeing people come in, but it seems to be the same people. They’re just like changing chairs at different health systems. How do people get into the, into the stream, into the mix for consideration and to, and to some of these roles that they’re looking at saying, hey, that, that looks interesting to me.

Bill Russell:                   11:54                And we were always open to that, the conversation. And I think that’s just one of the things people need to hear is even if you have a job today, you should be building that network today. No doubt. Uh, having the conversations and just meeting people and they’ll, and you guys are great working network, right? And you guys are great in terms of just sitting down and saying, Hey, this is what I’m thinking of for my career. And you go, all right, hey, you don’t have your masters. You might want to get to do that. Hey, absolutely, you might want to develop this skillset because this is what we’re seeing in the marketplace. Absolutely. And then every conference swing by again to say, so anything change or pick up the phone, you know, you don’t have to wait really only once a year. They, yeah, I’m sure you love working the booth and uh, appreciate you guys being here. And thanks for, thanks for being on the show. Thank you very much for your time. Take care.

Industry Leaders Investing
in Your Career 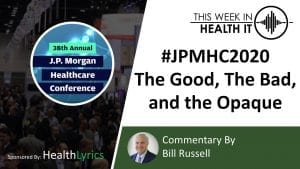 27 Health System CEO/CFO teams shared their accomplishments strategies and financials at the JP Morgan Healthcare Conference.  I took notes just to share it with you.  Hope you enjoy. 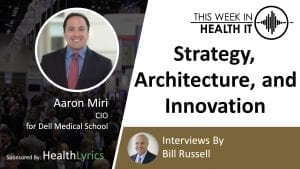 Dell Medical School has fast become one of the new leaders in the healthcare space. Since its inauguration in 2016, it has earned its place among the highest rung of forward-thinking medical schools and continues to serve its growing community with cutting edge technology and patient-focussed strategies in a truly remarkable way. Today we are joined by Aaron Miri, CIO at DMS to talk about his role and how he views the intersecting challenges of strategy, architecture and innovation. He gives us a direct line to the thoughts of a CIO and his insights will be invaluable to any healthcare practitioner. We discuss his approach to a multitude of scenarios and dynamics and his attitude to the central role of a CIO, staying abreast of current and new trends in the space. Aaron shares a bunch of his go-to strategies that make the complex and evolving landscape a little more manageable as well as expanding on the University of Texas’ foundational philosophy and how it permeates all that they do. For a fascinating and expertly articulated exploration of healthcare today, make sure to listen in!

Key Points From This Episode: 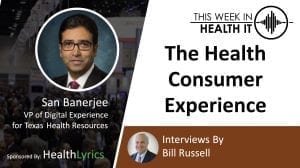 Episode 173 : Show Notes. Companies like Amazon, Walmart, and Best Buy are currently entering the health care provision space across the US offering technologically 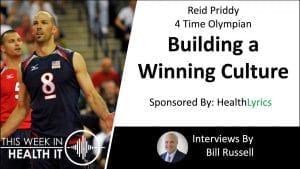 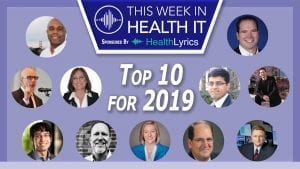 Which show is number 1? We produced over 100 shows with industry leaders this year and here are the top 10 shows for 2019. 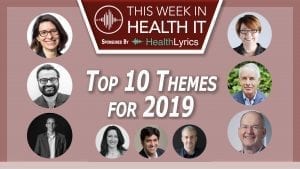 We published close to 90 episodes this year with wicked smart industry leaders.  This week we take a look back at the top themes from 2019 straight from the people who are on the front lines.  Hope you enjoy.

This Week in Health IT