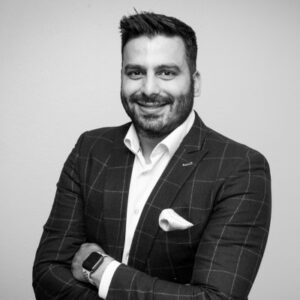 Rohan D’Souza is the Chief Product Officer for Olive.

Prior to joining Olive Rohan was Vice President and Head of Product at KenSci, a Machine Learning platform built specifically for healthcare that’s on a mission to fight death with data science. At KenSci, Rohan was accountable for driving the innovation and product strategy in bringing machine learning solutions to some of the largest and most prestigious health systems in the world, aligned to achieving the quadruple aim of healthcare. KenSci has pioneered a suite of machine learning models that are tuned to indicators that improve operational efficiencies, clinical quality, and financial profitability on a highly scalable, elastic cloud framework.

Prior to joining KenSci, Rohan was instrumental in building an industry leading population health solution at eClinicalWorks from the ground up. With over 100M patient’s data flowing through the platform, he helped some of the largest and most successful ACO’s in the US to understand opportunities within their data and build intervention strategies to drive change.

He is also a leading voice for the open health data initiative and was responsible for pushing the agenda on EMR systems adopting an open API framework for healthcare interoperability.

Rohan graduated from the University at Buffalo with a double degree in Biological Sciences and Business Marketing, focused on the intersection of health policy with biostatistics. His research helped guide the University at Buffalo to become the first public University in the state of New York to go completely tobacco free. While at UB, he was also a D1 Scholarship recipient on the Mens Swimming and Diving Team, the first Indian Swimmer to receive a college scholarship in the US. Rohan was an internationally recognized swimmer winning numerous medals across the Asian Swimming Circuit.

When not geeking out on data, Rohan likes to blog about cooking and mentor aspiring data explorers on the promise that a data driven world is better in every possible way.