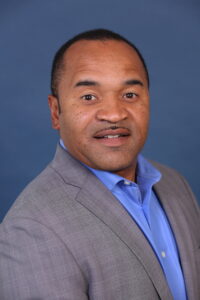 Tony Thornton is the Principal Advisor, Federal Healthcare at World Wide Technology. Tony spent 30 rewarding years of active service in the United States Navy, as a Naval Officer in the Medical Service Corps. A seasoned executive in Military Medicine, Tony served as the Chief Information Officer at the Bureau of Medicine and Surgery (BUMED), where he was responsible for the oversight and strategic delivery of health information technology and informatics for the U.S. Navy Health enterprise. At that time the Navy Medicine enterprise was comprised of over 62,000 users, supporting 2 Regional Commands, 19 Medical Hospitals, 169 Medical and Dental Clinics, 8 Expeditionary Medical Facilities and 2 hospital ships. He also served as one of the BUMED Deputy Chiefs, where he holds the distinction of being the most junior officer to head a BUMED “Single Digit” code for the Navy Medicine enterprise. As CIO, Tony was responsible for establishing the Navy Medicine enterprise wide IM/IT strategic direction, policy, and standards. He oversaw and monitored the IM/IT aspects of projects that require the integration of multiple IT information sources to achieve the goals and objectives of Navy Medicine. He provided daily oversight of the Navy Management Information Systems Support Activities Command (NAVMISSA) in San Antonio, Texas. He also served as the Navy Medicine’s liaison to the Department of the Navy, Chief Information Officer, NMCI, and other IM/IT organizations.

In addition to his BUMED role, Tony held dual responsibility for leading the transition and integration of the Army, Navy, Air Force, Joint Task Force National Capital Medical Region, and TRICARE Management Activity’s health IT infrastructure into the newly established Defense Health Agency (DHA). He was selected as the Chief, Infrastructure and Operations, within the Health Information Technology Directorate of the DHA. As Chief, Tony was responsible for over 1,800 military, civilian and contractor personnel to transition, integrate, and optimize the former Military Health System IT infrastructure services from the Army, Navy, Air Force, JTF CapMed, and TMA into a standardized and cost-effective IT shared services organization for the DHA. He was charged with improving healthcare service delivery by eliminating redundancies, improving the coordination of care across venues, and establishing standardized IT infrastructure services to improve and provide a more consistent experience of care across the MHS enterprise. He was responsible for the strategic direction and implementation of an integrated cost-effective health IT shared services infrastructure that centralizes IT functions, such as WAN, LAN, information assurance, storage, email services, down to the desktop.

Tony has the tremendous honor to have also served as the Chief Information Officer at several Naval Hospitals that include our “Presidents Hospital” the flag ship of Military Medicine – National Naval Medicine Center, Bethesda (now the National Military Medical Center, Walter Reed), and Naval Hospital, Yokosuka, Japan. He also served as the Chief, IT Integration, Joint Task Force, Capital Medical (JTF CapMed). In that role, Tony led a team of 290 IT and Informatics professionals that were charged with the complex migration and integration of the Walter Reed Army Medical Center to Bethesda. He successfully managed a budget of over $300M to install the infrastructure, telecommunications, medical equipment, and IT peripheries for over 1M square feet of renovated and newly constructed medical spaces on the Bethesda campus.

Tony is a healthcare, informatics and technology expert that understands how to leverage technology to improve health care delivery and patient outcomes.

Newsday – Health IT 2022 Predictions, Technology in Labor Shortage and the Future of Interoperability

Can Healthcare Maintain the Momentum of Innovation Catalyzed by the Pandemic?

On the financial side, you can see what your ATM card is doing on your phone, you can access your financial information anywhere in the world, but in healthcare, we can't do that. Why is that? There's a technology problem. Providers have to ensure that the right information is in the right place at the right time for patients.